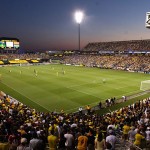 The Columbus Crew is an American professional soccer club based in Columbus, Ohio which competes in Major League Soccer (MLS). It is one of the ten charter clubs of MLS, having competed in the league since its inception. The Crew were owned by Lamar Hunt, who also owned the Kansas City Chiefs, Kansas City Wizards (now Sporting Kansas City), and Dallas Burn (now FC Dallas) until his death in 2006, when his son Clark Hunt took ownership of his sports properties.

We are your choice for and all your sports tickets needs. Visit SportsTicketBank.com to find all your favorite teams like the Columbus Crew. Whether you want to check the Crew schedule or decide which Mapfre Stadium games to attend, we have you covered!


Crew fans have a lot to cheer about these days with some of the new trades that are being announced. Get your Crew tickets and the best seats in the house to enjoy the games at Mapfre Stadium right here on SportsTicketBank.com.


Columbus Crew at Mapfre Stadium tickets are almost always available right here on SportsTicketBank.com. Don't forget to sign up to our email list to get special announcements on the Crew and other special ticketing opportunities.